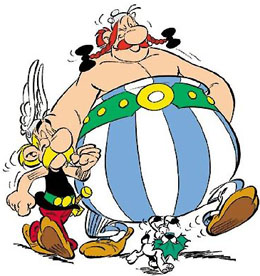 “The year is 50BC. Gaul is entirely occupied by the Romans. Well not entirely…
One small village of indomitable Gauls still holds out against the invading Romans. And life is not easy for the Roman legionaries who garrison the fortified camps of Totorum, Aquarium, Caudanum and Compendium”

That’s how my favourite comic books begin. These words are the beginning to a world full of adventure unlike any other. A world of magic portions and crazy romans, of menhirs and cacofonic musicians, of wild boar and village fights. And they usually end with a banquet!  No, my favourite comic book character is not some Kryptonian who wears his underwear on the outside or a billionaire fixated on bats. He is a fearless warrior  with feathers in his helmet and his ‘well covered’ menhir delivering friend. And by Toutatis! if the books are to be believed, history just wouldn’t be the same without them.

For the uninitiated, “Asterix and Obelix” written by Rene Goscinny and Albert Uderzo around the 1960s, set in the year 50BC is broadly about a little village of indomitable Gauls as they resist the Roman empire and follows Asterix and Obelix on adventures near and far!  It is the eternal tale along the lines of David and Goliath with an amalgamation of witty humour and brilliant illustrations. Disclaimer: These tales are not only enjoyed by the young, but also by the geriatric yet young at heart and everything inbetween.

The stories revolve around them defeating their enemies, helping their friends or solving village problems, with the help of a magic portion which gives the villagers superhuman strength. Other prominant characters are Dogmatix their dog,  Getafix the druid who brews the magic portion,  Vitalstatistix the village chief whose only fear is the sky falling on their heads and his wife Impedimenta, Cacofonix the bard who is usually gagged at banquets, Geriatrix the oldest inhabitant, Unhygienix the fishmonger and his wife Bacteria, Fulliaotomatix the blacksmith, Julius Caesar as Julius Caesar…You get the drift! 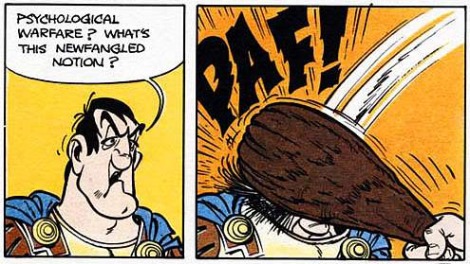 What makes the books so very wonderful is not only the tales of adventure but also the humour- both obvious and latent. Puns, caricatures, tongue in cheek,slapstick  humour, running gags, stereotypes and satire is what keeps readers hooked. If the names don’t bring a smile to your face, the way in which the protagonists change the course of history surely will.Some of it’s humour is lost due to translations to other languages (107), cultural differences, or the fact that it was written ages ago. Also, the humour is not always politically correct.

The little knowledge I have of Latin, I owe  to learning western classical music theory and Uderzo et Goscinny. Thanks to them by the time I was 10, I was familiar with veni vidi vici, cogito ergo sum, errare humanum es, sic ad nauseum , vis comica, et cetera. I also learnt some history ,some of which would not be found in any history books owing to its deviation from the truth. Here is a fans take : ‘Everything I ever really needed to know I learned from Asterix‘  Part One ,Part Two. I urge you to take a look, it’s a good collection of strips and will give you a peek into this world! 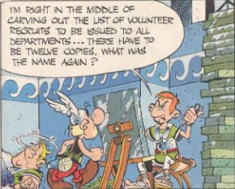 The books have something to offer for all ages. As a child, one enjoys the adventure, Obelix beating up the romans, village fights over stinking fish and the ongoing hunt for wild boar. For older reader’s there’s still a lot to enjoy.  The first strip depicts how  Obelix breaks the Sphinx’s nose while climbing it which is why, till this day, the Sphinx is noseless. The next is a spoof on ‘The Peasant Wedding’ , Pieter Bruegel’s famous painting. The third is a satire on administrative and government departments. The books are stuffed with such instances. Uderzo and Goscinny are simply brilliant, and this is what makes one want to read these books again an again

Asterix and Obelix is a legacy that must not be lost. I hope this post influences you to go try them if you haven’t and re-read them if you have. The tale of this little village standing out against the powerful Roman empire will warm the cockles of your heart and the humour is sure to tickle your funny bone

*’The vital statistics of asterix’ was the title of an  interview of Albert Uderzo by the BBC in 2007.

P.S.- I still do not know what a menhir is used for, or the recipe for that magic portion! 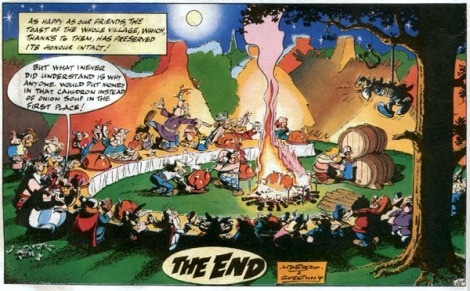 4 responses to “The Vital Statistics of Asterix” 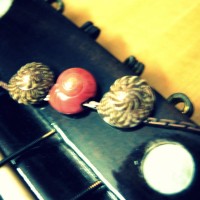